Ants can lift up to 5,000 times their own body weight, new study suggests – PCT Magazine 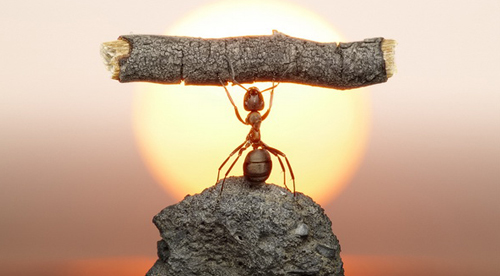 Ants can lift up to 5,000 times their own body weight, new study suggests

COLUMBUS, Ohio—High hopes may help move a rubber tree plant (as the old song goes), but the real secret to the ant’s legendary strength may lie in its tiny neck joint.

In the Journal of Biomechanics, researchers report that the neck joint of a common American field ant can withstand pressures up to 5,000 times the ant’s weight.

“Ants are impressive mechanical systems—astounding, really,” said Carlos Castro, assistant professor of mechanical and aerospace engineering at The Ohio State University. “Before we started, we made a somewhat conservative estimate that they might withstand 1,000 times their weight, and it turned out to be much more.”

The engineers are studying whether similar joints might enable future robots to mimic the ant’s weight-lifting ability on earth and in space.

Other researchers have long observed ants in the field and guessed that they could hoist a hundred times their body weight or more, judging by the payload of leaves or prey that they carried. Castro and his colleagues took a different approach.

They took the ants apart.

“As you would in any engineering system, if you want to understand how something works, you take it apart,” he said. “That may sound kind of cruel in this case, but we did anesthetize them first.”

The engineers examined the Allegheny mound ant (Formica exsectoides) as if it were a device that they wanted to reverse-engineer: they tested its moving parts and the materials it is made of.

They chose this particular species because it’s common in the eastern United States and could easily be obtained from the university insectary. It’s an average field ant that is not particularly known for it’s lifting ability.

They imaged ants with electron microscopy and X-rayed them with micro-computed tomography (micro-CT) machines. They placed the ants in a refrigerator to anesthetize them, then glued them face-down in a specially designed centrifuge to measure the force necessary to deform the neck and eventually rupture the head from the body.

The centrifuge worked on the same principle as a common carnival ride called “the rotor.” In the rotor, a circular room spins until centrifugal force pins people to the wall and the floor drops out. In the case of the ants, their heads were glued in place on the floor of the centrifuge, so that as it spun, the ants’ bodies would be pulled outward until their necks ruptured.

The centrifuge spun up to hundreds of rotations per second, each increase in speed exerting more outward force on the ant. At forces corresponding to 350 times the ants’ body weight, the neck joint began to stretch and the body lengthened. The ants’ necks ruptured at forces of 3,400-5,000 times their average body weight.

“ We made a somewhat conservative estimate that they might withstand 1,000 times their weight, and it turned out to be much more.

Micro-CT scans revealed the soft tissue structure of the neck and its connection to the hard exoskeleton of the head and body. Electron microscopy images revealed that each part of the head-neck-chest joint was covered in a different texture, with structures that looked like bumps or hairs extending from different locations.

“Other insects have similar micro-scale structures, and we think that they might play some kind of mechanical role,” Castro said. “They might regulate the way that the soft tissue and hard exoskeleton come together, to minimize stress and optimize mechanical function. They might create friction, or brace one moving part against the other.”

Another key feature of the design seems to be the interface between the soft material of the neck and the hard material of the head. Such transitions usually create large stress concentrations, but ants have a graded and gradual transition between materials that gives enhanced performance—another design feature that could prove useful in man-made designs.

“Now that we understand the limits of what this particular ant can withstand and how it behaves mechanically when it’s carrying a load, we want to understand how it moves. How does it hold its head? What changes when the ant carries loads in different directions?”

One day, this research could lead to micro-sized robots that combine soft and hard parts, as the ant’s body does. Much work in robotics today involves assembling small, autonomous devices that can work together.

But a difficult problem will emerge if the researchers try to create large robots based on the same design, Castro explained.

Ants are super-strong on a small scale because their bodies are so light. Inside their hard exoskeletons, their muscles don’t have to provide much support, so they are free to apply all their strength to lifting other objects. Humans, in contrast, carry comparatively heavy loads due to our body weight. With our muscles supporting our body weight, we don’t have as much strength left over to lift other objects.

On a human-sized scale, though, ants are overcome by basic physics. Their weight increases with their overall volume (dimensions cubed), while the strength of their muscles only increases with surface area (dimensions squared). So a human-sized ant, were it to exist outside of a horror movie, would likely not be so successful in carrying extreme loads at a human scale.

A large robot based on that design might be able to carry and tow cargo in microgravity, though, so it’s possible that we may one day employ giant robot ants in space, “or, at least, something inspired by ants,” Castro said.

Meanwhile, the engineers will study the ant’s muscles closely—perhaps using magnetic resonance imaging. Computer simulations will also help answer the question of how to scale up similar structures.

Blaine Lilly, associate professor of mechanical and aerospace engineering, began this work with former student Vienny Nguyen. Nguyen earned her master’s degree with this project, and is now a robotics engineer at Johnson Space Center, where she is helping to design NASA’s Valkyrie robot for the DARPA Robotics Challenge. Ohio State undergraduate student Hiromi Tsuda recently joined Castro’s team, and she is analyzing the ant’s surface textures in more detail. Castro and Lilly have also begun collaborations with Noriko Katsube, also a professor of mechanical and aerospace engineering, and an expert in mechanical modeling of biomaterials.

Funding for this work came from Ohio State’s Institute for Materials Research and Nguyen’s National Science Foundation graduate research fellowship. Computing resources were provided by the Ohio Supercomputer Center; structural modeling software support by Simpleware Ltd.;  and micro-CT by the laboratory of Richard Hart, professor and chair of the Department of Biomedical Engineering at Ohio State.

Next
Spring Pest Control Tips and Advice for the Muskoka Cottager

In order to help flatten the curve with Covid-19 we are taking measures to remain operational during the upcoming season with enhanced safety measures in place. Pest Control is an essential service and we will continue to provide you service and advice throughout the season.

During this time of crisis more than ever people need to stay healthy.

We ask that you vacate the premises when required during treatments and keep safe distancing. Our employees will wear PPE while providing service.

We are committed to your safety as well as the safety of our employees and will follow all necessary protocols to ensure health, safety and safe distancing. Our employees will respect your safety requests and are available to answer any questions you may have.